This week (05) have been full of events. Tuesday, the driver, Paul, picked up the bike to drive it to MotoFreight in Heathrow, UK. Paul, who is en ex-soldier, told me he had just come from Sweden and was going through Denmark on the way to Germany. From the he was to continue to Belgium and France to deliver and pick up more bikes. The guy was awesome and fun-spirited person and driving around Europe with other peoples bikes like they were his own.

Awesome to meet you Paul! 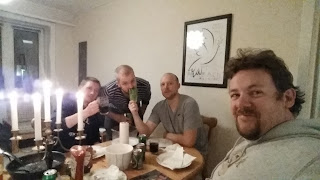 Because of the date my trip starts and my friends also going on vacation, Wednesday was the only available day we all could meet. They threw me a farewell dinner - sadly one friend turned out couldn't come after all.
One friend lives in the apartment underneath me and they all gathered there for preparing the feast - the good old standards: burgers!

Thanks a lot guys (Klaus, Tobias, Lasse and Philip).

Finally Thursday night, I bought my ticket to Buenos Aires (BA), Argentina. I arranged with the freight company that I would pick it up on Monday 22FEB and I wanted to arrive a couple of days early - however, the tickets for "a couple of days early" was too much money, so had to book it for 21FEB out of DK landing in the morning on 22FEB in BA. That means I would step out of the plane and go right to the customs. It is gonna be hard, but let's see how goes.

See you in the next update.
Stay safe.
RJ
Posted by Unknown at 5:06 PM No comments:


This is a long over due update; I have been silent for more than 2 months. A lot of stuff has happened, so let's get started.

Since last, not much have been prepared. My girlfriend was getting second thoughts about letting me leave for 6 months - on the other hand, I haven't been very good at trying to explain to her how I imagined this to go. She thought that I would be gone for 6 months without her being with me or see me - and that's clearly not what I wanted.

So after having a few talks with her about the trip, she is now again convinced that the trip is gonna happen and she gets excited about it too.

So basically, she won't be joining for the whole trip. She will fly in once in a while and spend a week or two here and there. Now when this is done in a strategic maner, the longest period we WON'T see each other will only be about 4 weeks. Those who knows us, that is not too unusual for us.

On another note, I have started researching shipping methods - so far I have asked James Cargo and Motofreight about shipping. I want it air-freighted, so it'll cost more, but it'll be easier for me and I dont have to do without the bike for as long. Plus if it is transported by sea, there can be some pretty substantial delays and I wanna avoid that on the outgoing leg. Shipping back home is gonna be less of a problem.
Since the communication is being done between Christmas and New Years, it is limited what I get of responses - however, James Cargo are very good at answering their emails. I might go with these guys even though it is about 200 GBP more expensive.

Since my last update, my work has taken me to Arizona. I was supposed to be there for only 3-4 weeks, but ended up staying almost 2 months.

While I was there, I talked to the people I worked with about my plans for driving the Pan-American trip. Several times, the contractor that worked with us (his name is Dan), invited me and and my colleagues out on ATV rides in the Arizona back-country and during many dinners I told him more and more about the travel plans.
He was very interested and very impressed by the scale of the trip - so he is sending me back home to Denmark with and open invitation to come back and borrow a room for when I pass next year. I very much appreciate the offer and will most likely take him up on that offer.

Dan has spend countless hours driving his ATV everywhere in the area, so he knew all the awesome small roads. He was an awesome guide.
These back-roads are definitely something I wanna visit again on the bike.

Just before Christmas I ordered a bit of stuff of the internet - mostly special tools for the that I think I need.
I still need to arrange some spare parts for the bike but I will talk to my local dealer when the bike goes in for service first thing in January 2016.

I better stop here and save some for the next update.
Posted by Unknown at 10:29 PM No comments: